Quick Links
Skip to main contentSkip to navigation
ATTENTION: The Lake Wanahoo Trail beginning at the north end of Cook's Park and continuing to the Hwy. 77/92 underpass is closed so that construction crews can work to repair several areas along the trail route. Thank you for your patience while we work to make the repairs and improvements! . 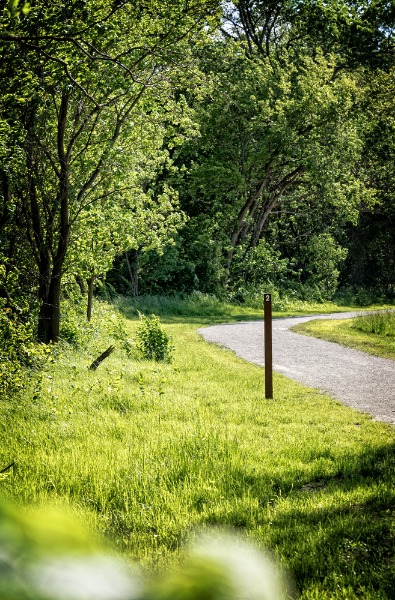 The City of Wahoo has completed three trail projects which total nearly 2.6 miles of dedicated trail corridors.  Click here to download a map of the trail routes currently available in Wahoo.  Reference the information below for specific details about each piece of Wahoo's trail system.

Completed in 2017, the Maple St. North trail establishes the northern 'spine' of Wahoo's trail network.  The trail is approx. 3,600 feet (.68 miles) and utilizes the Maple Street corridor.  The 10' wide concrete trail connects the Wahoo Library on the south to Placek Park on the north.

Completed in 2016, the Lake Wanahoo Trail - Phase 2 is currently the largest piece of Wahoo's trail system and provides important connectivity from the northern city limits of Wahoo to Lake Wanahoo.  This trail section begins at the north edge of Cook's Park and closely follows the meanderings of Sand Creek.  On the northern edge of the trail users can safely access the Lake Wanahoo trail system via a box culvert that runs underneath the four-lane Highway 77 Expressway.  This piece of Wahoo's trail system is approx. 7,200 feet in length (1.4 miles) and has a 10' wide crushed limestone surface.  There are three small picnic shelters and two rest areas with benches along the length of the trail.  Click here for a trail map showing locations of shelters and trail markers.

Completed in 2021 and donated to the City, the Sycamore Trail is approx. 1,000 feet (.2 miles).  The 8' wide aggregate-surfaced trail runs between 23rd Street on the north to Chestnut Street on the south...near the JEO Consulting Group building.

Trails offer numerous aesthetic and recreational opportunities, as well as commuter options for traveling to and from destinations in Wahoo.  Residents who desire to bicycle or walk to work or school, go for a family bicycle ride to the park, library, or aquatic center will benefit from safe, connecting trails.  Trails often help raise property values, provide common space for social interactions, improve overall community safety, and encourage healthy lifestyles.  They can also improve over-use conditions in sensitive environmental areas when designed properly.

A high-quality trail system is a marker of a community that is truly great to live, work, and play in.  The Wahoo Master Plan (referred to as the Plan) uses the term ‘trail’ to describe shared use paths, multi-use trails, and hiking pedestrian paths designed for non-motorized usage.  Trail users may include but are not limited to: bicyclists, non-motorized scooters, in-line skaters, users of other wheeled devices like Segways or electric assist-bicycles, roller skaters, wheelchair users (both non-motorized and motorized), walkers, and runners.

Wahoo has many opportunities to develop a quality trail system.  There are opportunities to create a unique trail system on abandoned railway corridors and to develop trails as Wahoo continues to grow.  As part of the development of the Plan, several components were analyzed including potential trail corridors, connecting points, destination locations, and future residential and commercial growth areas.  The Plan calls for creating connections between schools, public facilities, local neighborhoods, parks, and the downtown business district in Wahoo as well as Lake Wanahoo.  The possibilities for trail development and growth are tremendous.

Recreational Value and Health Benefits
The recreational value of trails are often their foremost attraction.  In addition to the entertainment values of recreation, there is a significant health and fitness benefit as most recreation activities on trails involve exercise.  This health benefit accrues to the individual, and, in the form of reduced health-care costs, to society as well.

Transportation Enhancement and Safety Benefits
Serving as transportation corridors, trails encourage pedestrian and bicycle commuting as an alternative to automobile commuting, thus reducing traffic and congestion on roads, and reducing fuel consumption and its associated pollution.  Again, there is a health benefit in choosing this mode of transportation.  Safety is another community benefit where designated pedestrian and bicycle paths provide an opportunity to separate human-powered commuters from automobiles.

Economic Benefits
Recreational, educational, historical and cultural sites, museums, and trails attract tourists.  This brings a direct economic benefit to local restaurants, hotels, and service stations as tourists spend dollars on food, lodging, and gasoline.  Equipment and clothing vendors, and other commercial establishments may move into the area to serve the population attracted by a trail.  For example, in a 1992 study, the National Park Service estimated the average economic activity associated with three multi-purpose trails in Florida, California and Iowa was $1.5 million annually.

Communities with trails often benefit in terms of improvements in corporate relocation and retention rates, since quality of life is an important factor in choosing sites for business and industry.

And last, but not least, there is an economic benefit as property values increase due to proximity to green space and increased overall community livability.

Environmental Benefits
Trails and greenways can play an important role in improving water quality and mitigating flood damage.  Greenways preserve critical open space that provides natural buffer zones to protect streams, rivers and lakes from pollution run-off caused by fertilizer and pesticide use on yards and farms.  They can also serve as flood plains that absorb excess water and mitigate damage caused by floods.  Such conservation efforts make good sense, because they save communities money in the long run.

Preserving Our History and Culture
Trails have the power to connect us to our heritage by preserving historic places and by providing access to them.  They can give people a sense of place and an understanding of the enormity of past events, such as Indian trails and vast battlefields.  Trails and greenways draw the public to historic sites.  Other trails preserve transportation corridors.  Rail-trails along historic rail corridors provide a glance at the importance of this mode of transportation.